I have been unable to find film developer here locally in Sobral, Ceará. So began researching alternative film developers. The first result I came across was Coffee. Well I have that I thought, how cool. Some more searching and reading led me to http://caffenol.blogspot.com by Reinhold. He documents and explains this method of using 4 fairly common ingredients with precise recipes for 3 types of developer.
While in college I came across several unopened 4X5 25ct. boxes of Illford’s XP2 C-41 Process B&W film, ISO 400. Its expiration date was already passed, Dec 1995. Still worth a try right? After finding Reinhold’s blog I was inspired, and couldn’t get started soon enough. On my lunch break, I quickly snapped 2 shots of my Daughter in our carport with my Speed Graphic and then headed to town to get the last ingredients I needed.
Every recipe I found was listed in weights. I don’t have a food or jewelers scale so I had to do some research. I found in various corners of the internet, weights for tsp measurements of my ingredients. (i.e. 1 tsp Baking Soda = 4.7g) I converted all my ingredients and started to mix.

My First Recipe for Caffenol-CL

500 ml – Water from my Brita Filter
11 TBS – Salt
First I started a cut strip of the undeveloped/exposed film in the salt fixer to find the clearing time. (The time it took for the purpleish color of the emulsion to disappear.) After about 2 hours it was all gone, so doubling that time would be the amount of time needed to fix the negative in that salt solution.

I started with a 5 minute prewash in Brita Filtered water. Then moved the 2 sheets of film into the Caffenol-CL for 65 minutes. Agitating for the first minute, then 3 inversions after a further: 2 minutes, 6 minutes, 12 minutes, 26 minutes and then 18 minutes later moved the film to rinse under tap water for 5 minutes.
By the time I got to this point it was about 11:15pm and since I didn’t want to wake up at 3:15am to check on my fixing negatives, I decided to check on them at 8:15am. (Some reading the night before suggested that over fixing wouldn’t be a problem as long as you didn’t leave it in the fixer for more than 8x the clearing time. So I didn’t think 9 hours would make too much difference.)
I did a final rinse in tap water for 5 minutes and then one last rinse in tap water with a drop of dish soap to act as a rinse aid.
Hung the sheets up to dry. This step was maybe the fastest as the climate here is so dry and hot.

There was an image!
Now though there was an image, the negative was very very dense. I think it could be the result of a few things. My volt meter has a option for reading temperature, and one of the numbers on the digital readout does not always display properly, however I think it was fairly accurate. I didn’t want to use tap water, and since room temperature water is 24 Celsius I cooled it down with some filtered water from the refrigerator. My final temperature about 15 minutes before starting developing was hovering around 19 and 20 Celsius. In my excitement I knew, but forgot to develop longer to account for the cooler temp.
I think in my next attempt correcting this should give me a much more useable image.

Because the negatives were so dense, to scan them I knew that my Epson Perfection 4990 Photo Scanners built-in transparency unit would not be bright enough to properly illuminate the image. I placed the negative on the scanner and placed a plain sheet of white paper on top of it. Then I set up one of my Smith-Victor 700SG 600 Watt Quartz Lights 1 foot from the paper with the light centered on the negative. I scanned each image several times and settled on the best one.
In Photoshop I inverted the image to make it a positive, increased levels and contrast and desaturated it to eliminate the blue tint it took on after being inverted from the purplish cast of the film. 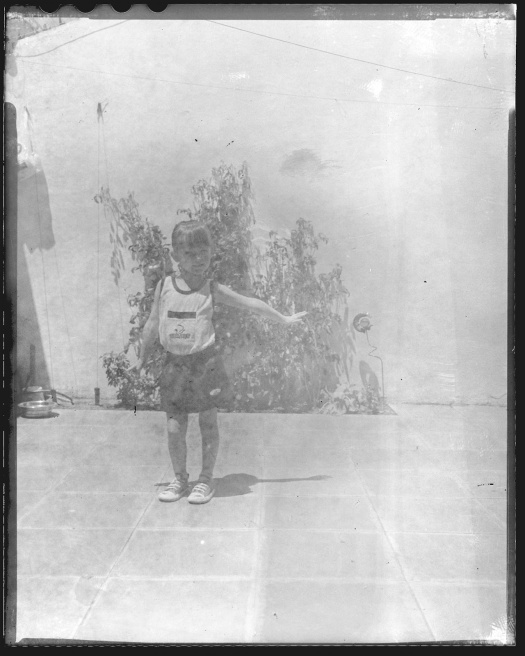 Audrey and the Carport Garden 2
XP2 ISO-400 1/400th sec @ f/16 Developed in Caffenol-CL
I will most definitely be trying this again, as I have just found a box marked exposed film. I’m not sure what is on them, but I’ll find out soon!